The festival and Students 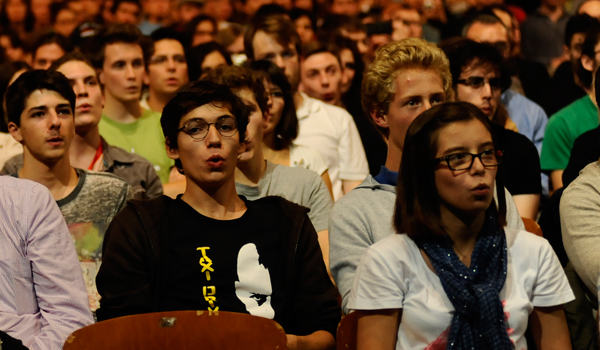 Each year, the Lumière festival works with educational institutions. For its 2014 edition, more than 4,500 students throughout the Rhône-Alpes region participated in the festival.

1 / High school students at the festival

The Institut Lumière allows students of all grade levels to participate in the screenings. A set number of seats is reserved for each screening for students and their teachers.

The bus trip is coordinated by a Rhône-Alpes region program. Schoolchildren pay a special rate of 4 € (instead of 6 €).

With the support of

2 / Intermediate and High School students at the festival

From September to the festival, a speaker from the Institut Lumière goes to various high schools and intermediate schools to prepare the students for the screening chosen by the teacher. The speaker explains the main ideas and the organization of the Lumière festival to the students in order to optimize their participation.
Travel package : 40 euros

Every year, two high school classes in the Rhône-Alpes region are selected and have the chance to attend the opening night and closing ceremony of the festival.

3 / Workshop in primary and intermediate schools

Cinema experts go to primary and intermediate schools in Greater Lyon to conduct workshops on the themes of the invention of cinema or the language of cinema.
Reservations with Fanny Guidecoq in September.
Travel package : 30 euros

Five workshops to choose from!

Through listening and observation exercises, your students will explore the various roles of film music.

Every year, more than 2,500 students come to the Lumière festival.
This year, each high school student who attended a screening may vote for a film via the Internet or by turning in the ballot to the teacher.

RESERVATION REQUIRED FOR ALL OF THESE ACTIVITIES :

Information only by email from Fabrice Calzettoni, head of the education department of the Institut Lumière: fcalzettoni@institut-lumiere.org