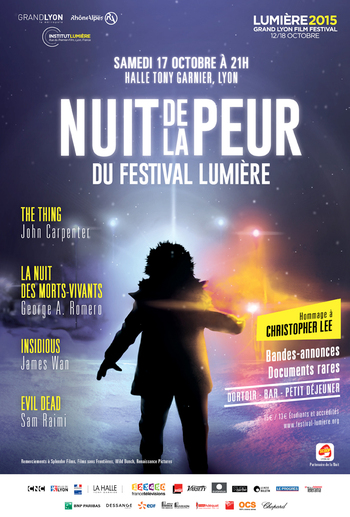 The Thing / Night of the living dead / Insidious / The Evil Dead

Four inescapable films for a perfect night of chills at the Halle Tony Garnier!
Presented by Alain Chabat.

It's a night that promises to be ultra intense! After themes of the American comedy, science fiction, music and film, Monty Python and Alien Night last year, genre cinema takes up residence once more at the Halle Tony Garnier on Saturday, October 17!

Alien parasites, the living dead, spirits and demons...
Put your nerves to the test all night long with four classic horror films, concocted by masters of the genre: John Carpenter, George A. Romero, Sam Raimi and James Wan.
You'll find a dormitory behind the screen for the weary (and the least affected) and the traditional breakfast after the last film.

Join us for a unique and collective experience, the all-nighter at the halle Tony garnier!

Four must-see films for a perfect night of terror at the Halle Tony Garnier!